DECEASED:  Firebird is 16h Oldenburg mare by the deceased Rheinland stallion, Feuri (Fidermark/Worldchamp/Fruehlingsball) out of Wygelia, ( Walk on Top/Aktuell).  Injured in an accident as a yearling she was sadly unable to fulfill her pedigree as a performance horse.  Fortunately,  we have been able to  aquire her for our breeding program here at Edenhof! Besides her super good looks and conformation, she offers 3 quality gaits with exceptional cadence and rhythym .  Inspected and approved in both the Oldenburg and Westfalen Main mare books, she is the 3/4 sister to the Oldenburg stallion, Freedom, who is currently gaining fame as he enters the FEI world under the guidance of rider/trainer Patricia Becker of Chicago, Ill.   Some of Freedom’s other accolades include being the USDF Five Year Old Horse of the Year in 2012, remaining unbeaten in Regional competition Training thru 3rd Levels in 2013,  and in 2015 wining the USDF Region 2 Prix St George Championship!

Firebird is “in foal” for 2018 to  the 2013 Bundeschampionat/2014 Vice-Bundeschampionat, Furst Fohlenhof!  This first foal is eagerly expected in April! 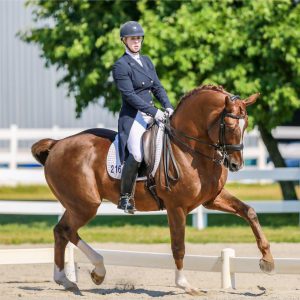